Once again it's that time of year... New movie premiers and celebrities parading in their stunning outfits down the red carpet and into the Grand Lumiere Theatre at the Palais des Festivals. It's a must see for all fashionistas, who look for the inspiration from the beauty and glamour from the most important of all the season's events, Cannes Film Festival.

This Saturday, 14th March 2016, was a red carpet debut of the most charming young actress Ruby Barnhill, who played Sophie in the Steven Spielberg's latest fantasy adventure film The BFG, the $100 million Disney adaptation of the 1982 children’s novel by Roald Dahl.

Ruby, the rising Hollywood star, isn't just great at acting, she also has a great taste in fashion. Born in Cheshire, Ruby has been charming BBC viewers with her engaging character and good manners as well as a exceptional taste since 2011. And her deal for the 3 The BFG movies will bring her £490k before bonuses. No wonder that the dress for her red carpet premier this super talented girl has been choosing herself.


"As any modern child, Ruby has been looking for a perfect dress online, including on the one of the biggest online childrenswear boutiques childrensalon.com, which represents over 270 famous brands, including Lazy Francis. Burberry, Dior, Gucci, Fendi, Roberto Cavalli... and amongst so many wonderful choices, she fell in love with Lazy Francis silk couture dresses", commented the brand's creative designer, Olga Kruze.

But of course, the perfect dress has to be seen and touched, and helping Ruby to find the right look for her many upcoming media appearances was... who else... one of the best London's celebrity and movie stylists' Faye Sawyer, who brought together a vast and magnificent selection of outfits to choose from. And among so many options, Ruby chose the original green silk couture dress with 23 meters of French lace, designed by Lazy Francis.

"It was for me as a stylist, really important that the dress that Ruby wears to Cannes worked with her character, and Lazy Francis absolutely get that... Each of their designs has a unique quirky and fun element," - commented Faye Sawyer.


The young star made a perfect choice and was certainly the centre of attention. Her photos walking down the red carpet holding the hand of the world famous director Steven Spielberg were all over the social media within seconds.

Written by Melissa Mathison, the film stars Mark Rylance as the Big Friendly Giant, a 24-foot tall gentle dreamer, who impulsively kidnaps the little orphan Sophie, played by an 11 year old British school girl, Ruby Barnhill, to save him from his loneliness and to accompany him on a mission to convince Queen Victoria (Penelope Wilton) to help them rescue children from the bad giants once and for all.

When interviewed, Ruby told journalists: 'The only thing that I have ever done before doing this incredible film was going to a drama class for a very long time. And I did a children's TV show. It feels really magical and amazing to think I'm here now.”

The other stars of this magical film Penelope Wilton familiar to you from Downtown Abbey, Rebecca Hall, Bill Hader, Rafe Spall and Jemaine Clement have also accompanied the pair on the red carpet.

Will Ruby and The BFG share the same success as Drew Barrymore and E.T. did in 1982? We will all see very soon, with the movie being release in UK on 22nd July 2016. And what will you wear to your watch this masterpiece at the cinema near you?

Ruby like many other girls and boys, chose Lazy Francis for the comfort, style and individuality of the brand's designs. Offering the clothes and accessories for kids who want to have their own style and stand out from the crowd is Lazy Francis' philosophy.

While couture dresses are a birthday dream for many girls, the contemporary casual outfits from as low as £45, will make every day feel special and unique.

Luxury British childrenswear brand, Lazy Francis, has been created in 2013 to give kids the opportunity to make their first steps in the world of fashion, through showing their individuality and innovative designs. Kids love wearing Lazy Francis because they can create their own sense of style and still keep the element of childhood fun, that comes through the collection colour choices.

Being the favourite choice of young fashionistas, Lazy Francis clothes and accessories can be found in the boutiques anywhere from Middle East to US. In UK, you can also buy Lazy Francis on the brand's website www.lazyfrancis.com, on Children Salon and soon in Harvey Nichols and brand's soon to be revealed flagship boutique in Central London.

Let customers speak for us

Thank you for the gorgeous dress! High quality and fine-tuned to the detail. Perfect customer service. A pleasure! Absolutely worth the money. 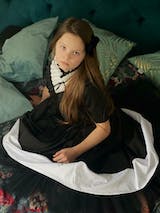